For Sounds of the Silent City, I wanted to compose a creative sonification of Aberdeen City, exploring not just the sound marks of the city but also the atmosphere. As there is no singular location that on its own would encapsulate Aberdeen, I decided that this piece would take the listener on a journey through different parts of the city. We start on the train bringing us into the station. We hear the sounds of the beach we are passing as well as the mechanical clinks and whirring of the train engine (0:55).

Once in the city, we are bombarded with sounds of inner city life – bus breaks, seagulls, crowds of people (1:46-2:00) giving us a snapshot of what to expect in Aberdeen.

This section forms a retreat from the chaos of the city whilst also nodding towards the quartz that gives granite its sparkle. From here, the engine of Aberdeen starts up again (6:08-7:46) and we travel out to the far more relaxing location of the beach, sounds of the waves bookending our journey.

Within this basic frame, I allowed myself freedom over processes and choice of sounds. Due to this freedom, I noticed my tendency to include many rhythmic phrases within my work.

Sounds of the Silent City (2017) is a creative sonification of Aberdeen. I tried to assume the perspective of a newcomer travelling to the city, imagining a journey up the North coast by train into the city centre and out towards the beach. Rather than creating a pure soundscape of the locations, I wanted to instil the feel of Aberdeen upon the piece. The train journey up the coast is reliably relaxing – the sparkling North sea is on your right and seas of endless green fields are on your left. The train station is in the centre of the city. A five-minute walk is all it takes to arrive at the busiest point – Union Street. Visiting any city centre for the first time can be an intimidating experience. Everything familiar yet unfamiliar at the same time, you try to make sense of the place as quickly as possible, orienting yourself to where you think you want to go. Sounds of the Silent City attempts to use soundmarks of Aberdeen in such a way as to convey these feelings of tranquillity, excitement, and intimidation, capturing the essence of a place. While Sounds of the Silent City is specific to Aberdeen, it is likely that listeners with experience of other seaside cities might relate the piece to other locations instead due to similarities found across coastal city soundscapes. 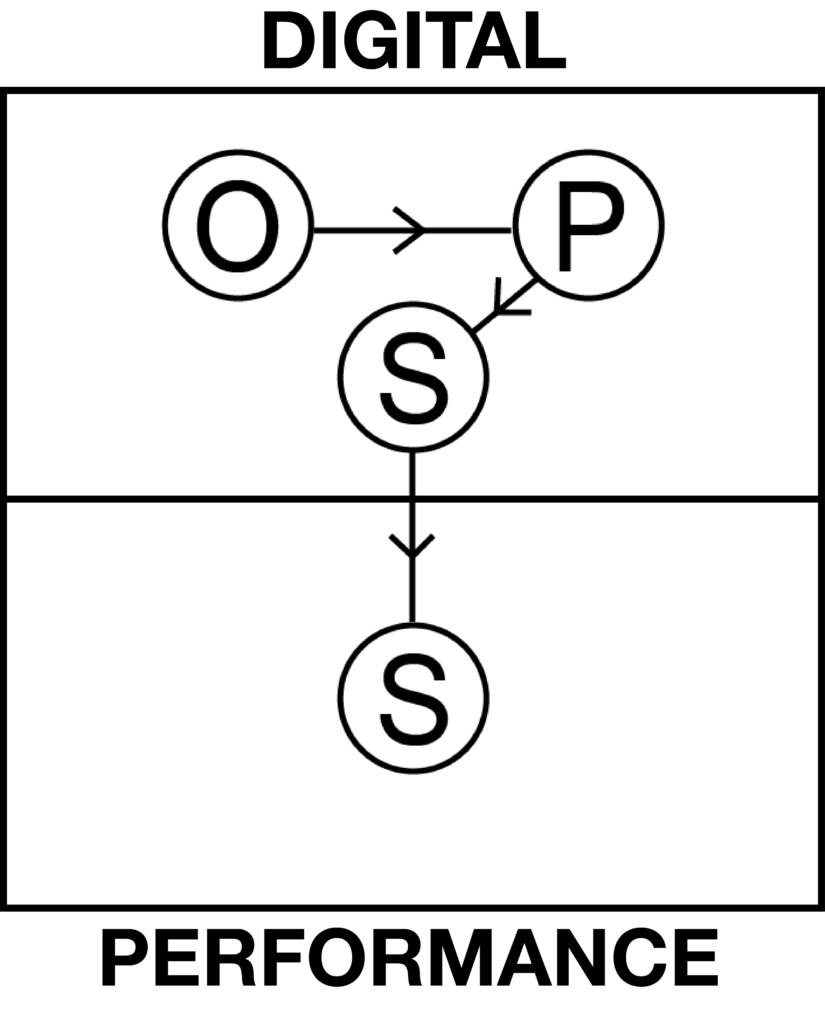 The piece opens with an instantly recognisable soundscape of a beach and slowly transitions into a mechanical whirring sound (0:55) as we are taken from our idyllic coastal setting and whisked away to the busy city.

We hear snapshots of commonplace sounds such as heels on the pavement, bus brakes, and seagulls as if overwhelmed by the hustle and bustle of the city we are glancing around trying to take in everything (1:46-2:00).

The sounds continue to take us on a journey through the city with pedestrian crossings and voices until we reach a moment of stillness presided over by the ticking of a clock (5:15).

The clock sounds transition into a harsh glass-like tapping which becomes out of sync and eventually launches us back into that city soundscape once more (6:08).

When the piece makes its return to the beach, we feel differently about it, having since experienced the hectic city.

In contrast to Lines, there is very little in the way of unrecognisable material. In many instances, the sounds are either unrecognisable because they are out of context – the extractor fan as we leave the beach scene (0:55) – or the manipulations are only minor, and the listener is still able to identify the source.

Two places are apparent in this piece – the beach and the city. These two very different locations are both parts of the typical Aberdeen soundscape. The samples of the beach are left almost untouched. In contrast, the city sounds are sculpted to portray the business and the relentlessness of the city centre. Using the same beach sounds to bookend the piece allows the listener to have two different experiences of the same material. Like palette cleansers, the gentle sound of lapping waves gives the listener an opportunity to become relaxed both before the piece starts up and as it is finishing. Initially, it establishes a location and calm atmosphere, though, in the end, the natural beach soundscape functions as a contrast against the engine of the city and is not dissimilar to changing into your pajamas after a busy day.

As is typical of a city centre soundscape, many sections in this piece are dense and noisey. The sound, like an impenetrable wall, fills out the auditory plane in all directions. Through sometimes quite extreme equalisation techniques, there are instances when sounds are brought up close or taken far away (1:43-1:49, 1:56-2:02, 3:20-3:27, 4:14-4:36), mimicking the ebb and flow of the waves at the beach where we started this journey.

At other moments, the emptiness of the soundscape provides a refuge, though maybe some listeners will feel unsettled by this space (3:39-4:45 and 5:34-6:10).

Sounds of the Silent City is a stereo piece for diffusion over multiple pairs of loudspeakers; a performance medium, which was selected so that the bombarding sounds of the city soundscape can surround the listener. This is intended for an indoor performance with no alterations to the performance environment.

The realisations I made about this piece from using the framework were not to do with how I approach the elements of S.O.A.P.. Rather, through meditating on the specific aspects of space, objects, agency, and place, I noticed a tendency that also comes through in other works of mine. This is the tendency to use rhythmic phrases. In Sounds of the Silent City, I use such phrases to mimic the sound of a train, the concept of progressing onwards, and to build suspense. Rhythmic phrases can also be found in Lines, Bearing Zero, and YinYang. I had not noticed this tendency before conducting this analysis and I believe that S.O.A.P. helped me to realise this element of my unique compositional style.

I also began to realise the limitations of acousmatic music, primarily, the limitations of its performance. Whilst the presence and ordering of S.O.A.P. elements in the digital environment can change, the performance environment for acousmatic composition will always remain the same (as far as the S.O.A.P. diagrams are concerned). I believe this to be one of the reasons why I like to jump between genres. I deeply enjoy being creative and innovative not just with sound itself, but also with the visual aspects of a performance. Therefore, acousmatic and electroacoustic music bring restrictions to my creative practice that I do not always want.