My second audio-visual piece was a collaboration with visual artist, Amy Barnett. The initial restriction was adapting my artform within the context of Barnett’s human-made rock sculptures. We decided to take the listener on a journey into the rocks and, therefore, took audio samples from her sculptures. I then used these as the material with which to make the audio. Barnett created the video portion first before I added the sound. I wanted to avoid simply micky-mousing the audio to fit how the handler is using the rocks while also keeping the audio relevant to the visuals. I tried to maintain the natural texture of the rock sounds and the hints to gestures that made them. Similarly to 57N, I designed the diagram before I created the piece.

As a test of the S.O.A.P. framework, I now wanted to see how I could achieve the same diagram as another piece (in this case, Lines) but through a different medium. Having focused on agency and place, I felt that I should explore space in the same way. In(Habit) Space provided the perfect opportunity to do so. Amy’s human-made rock sculptures function as a microcosm for planet Earth as well as a comment on human exploitation of our planet. Her sculptures are formed using very fast, unnatural methods that produce natural-looking rocks. She asked me to work with her to explore the ‘voices’ of these rocks. We looked into Schumann frequencies – the resonating frequency of the earth (usually 7.83Hz) – and decided that we wanted to create a more artistic impression of the Earth’s ‘voice’ using audio recordings of the rocks. We also considered inhabitation – how living organisms exist on the surface as well as inside the rocks. As we cannot physically travel into the centre of these rocks to hear it for ourselves, we wanted to give this impression of internal habitation to the listener.

Working in collaboration with visual artist Amy Barnett, I created a representative journey through the connection we have to the natural environment. In(Habit) Space is an audiovisual piece that questions the nature of time in the process of natural and man-made creation, as well as the dual occupancy of space – possible habitation versus impossible habitation.

Placing two contact microphones under Barnett’s stone sculptures, I explored the sounds of these sculptures which are often untapped – listening to their unique voices from within the rock, playing with different ways of handling the stones, rubbing them against each other and using other materials on them to fully explore their sonic affordances. But these rocks no longer sounded like rocks: some sounded like running water, others sounded like scraping and bubbling. The accompanying visuals demonstrate each sculpture being caressed, touched, rubbed as an intimate experience in video representation. This harmonises with the sound surrounding the audience, making the composition a visually and aurally immersive experience. 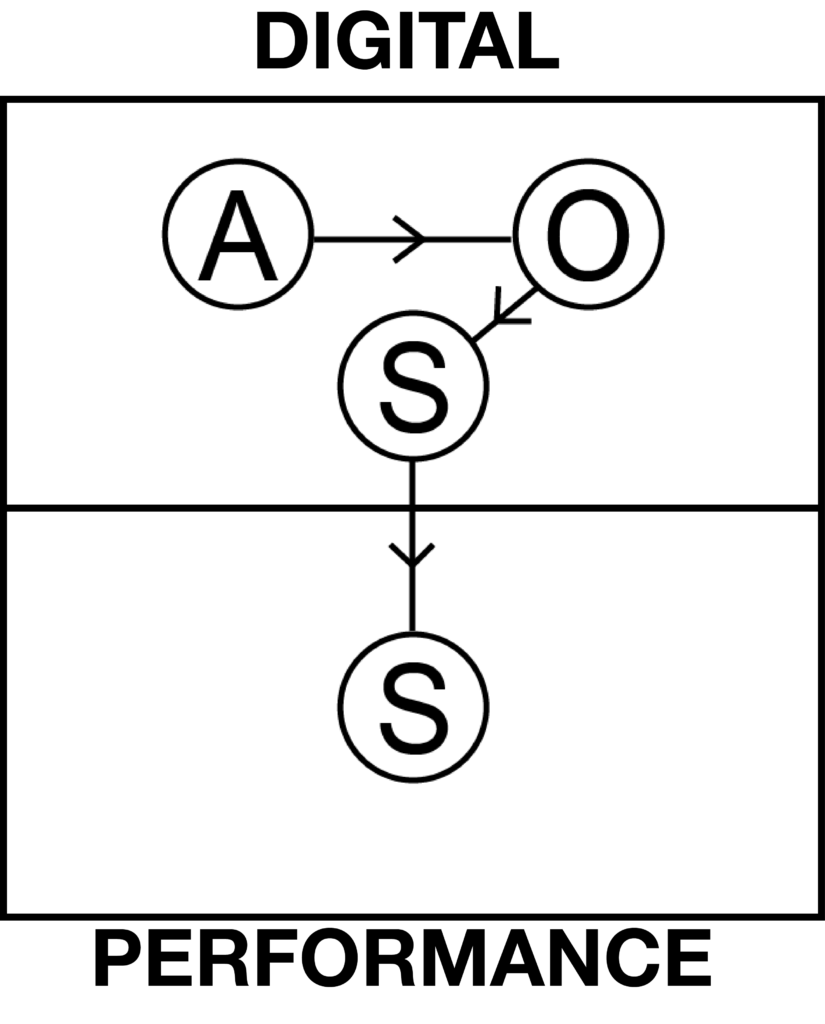 In the digital environment we have multiple layers of agency. Most prominently, there is the ‘performer’ on the screen. This creates a strange dissonance with the sound as it is clear that the two are related but not directly so. We can think of this as a displaced agency as we could easily believe the person in the video also created the sonic material and the effect of their actions is simply being experienced at different times sonically and visually.

There are three types of sounds used in this piece. The first is a field recording from the quad at Gray’s School of Art in Aberdeen (0:00-2:00). I used this to represent a place ‘outside of the rock’. The location of this recording is not significant, therefore I have not included the aspect of place in the S.O.A.P. diagram for In(Habit) Space. This serene soundscape begins to distort as interference from digital devices starts to disrupt the tranquility (0:33 onwards)

Over time, the soundscape degrades, seemingly going out of sync with itself (1:00-2:00).

This is a reflection of the negative impact humans are having on the natural world. The third type of sound material is the recording of the rocks themselves. This forms the majority of the piece (1:00 onwards). Through the various handling methods we employed, the raw sound recordings gathered from the rocks were all very interesting. Some samples are like a dry scraping (1:05)

Space was a big factor in this piece’s creation as we wanted to create the impression of being within the rock. Initially, we begin out-with the rock, hearing its surroundings. Then, as we delve deeper beneath the surface, the sound becomes denser. All of the rock recordings were taken with contact microphones in order to capture as much detail as possible.

This audio for In(Habit) Space is a stereo piece for multichannel diffusion. This performance method was selected for the three-dimensional opportunities it affords the sound – allowing the sound to envelop the listener and add to the feeling of immersion within the rock. No further alterations were made to the performance environment.

Although In(Habit) Space was composed around a pre-existing diagram, considering each S.O.A.P. aspect individually once again taught me more about how I approach agency in my compositions. Sometimes, having a clear agent does not yield the most interesting results. I consciously did not want to micky-mouse the audio to the visual. The digital agency of the rock handler is already established in the video, therefore, there is little point in further showing their agency with sound. Because I wanted the sounds in the piece to be clearly of the rocks, the audio offers its own sense of agency. Contrasting this against the agent on screen creates a sense of displaced agency – something I had not explored before but would like to explore in future work. Were it not for the S.O.A.P. analysis, I might not have consciously taken note of this new type of agency.