In my audio-visual piece, 57N, I took a different approach to my restrictions. The images were fixed to the idea of gradually becoming more specific to a singular location. NASA had recently released a huge bank of copyright-free sounds, which was perfect to take inspiration from as I wanted the audio to reflect the spaces we were traveling through. The audio was not high quality, so I took a selection of sounds as inspiration and through various audio manipulation techniques, tried to emulate them. It was not my intention to replicate them exactly, but rather to use them as a starting point and see where my ear took me. The resulting sounds in my piece range from being incredibly similar to the NASA sounds to being nothing alike.

For 57N, I first drew the S.O.A.P. diagram and then considered ways to turn it into a composition. The main point of interest is the presence of place and a performative agent, which both exist in the performance and digital environments simultaneously. I identified several ways to do this, most of which involved having a live performer who also featured on screen and using footage of the venue in the video itself. However, these ideas lacked the temporal specificity I needed for the concept I wanted to explore. I noted that I should treat the exact time to which I was referring in the same way as the location. This is because the properties of a location can change over time, therefore, it is important to specify the time and date in the piece. The best way to proceed was for the piece to reference the time and location of its performance.

To start the concert, the performer welcomes the audience by announcing the exact time and coordinates of the venue. This introduction is recorded and edited into the piece itself, which is performed towards the end of the concert and begins with visuals of deep space. In the recording submitted in my portfolio, we gradually begin to get more specific, moving into the Milky Way (0:35), to planet Earth (2:03), to the U.K. (2:55), to the North East of Scotland (3:30), and Aberdeen (3:35).

I then show footage of Union Street and of walking up and into the Butchart Centre (3:48-4:12).

This footage of the venue should be taken just before the concert is about to start. We then are taken inside the venue, along the corridor and into the concert hall where we would see the audience as they were just moments before the event began (4:44). The piece ends with a video of the exact introduction that the performer gave at the start of the evening, where they state the geographical location and time (4:52).

The piece starts in deep space and gradually zooms in on a location on planet Earth. To reflect this journey, the sound begins abstract and with the impression of vastness. The inspiration for the audio was taken from audio files from deep space released by NASA. 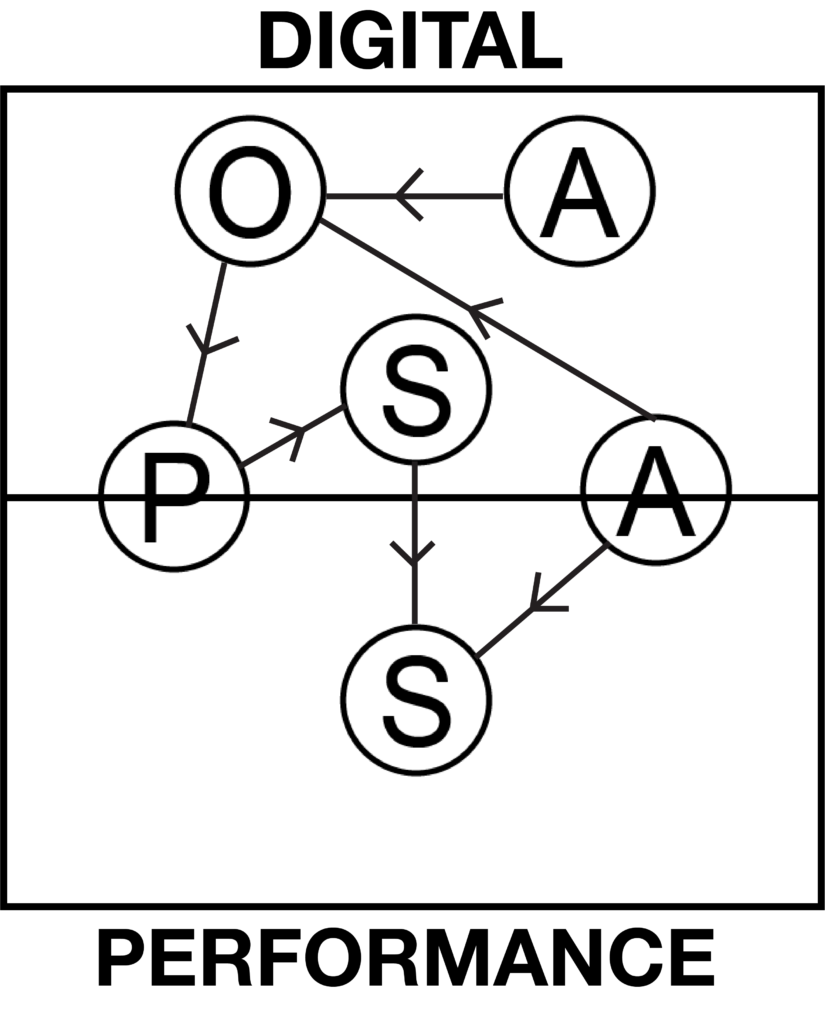 The sense of agency in 57N is multidimensional. The agency that exists purely in the digital environment refers to the people in the video who we see walking around Aberdeen. These people are contributing to the soundscape by driving cars, activating pedestrian crossings, and walking on the pavements – a collective agency. This does not encompass any audience members or performers as they are accounted for in the agency that lies between the digital and performance environments.

57N initially attempts to replicate sounds found in deep space. The inspiration for these comes from sounds released by NASA. As the piece progresses, we begin to hear the sounds of Earth. This first takes the form of radio static (2:35) before using field recordings of Aberdeen city centre (3:24).

Gradually, the city soundscape becomes clearer and we can hear the sounds of seagulls and pedestrian crossings (3:51)

As we approach the Butchart centre, the traffic sounds quieten and the atmospheric sounds of space re-emerge (4:13).

Once in the hall, we see and hear the audience as they were before the event began. As the camera moves around to show the front of the hall, the performer introduces the event, stating the exact time, date, and location.

Initially, the locational aspects of this piece are only evident in the video as the soundscape of space is not one that many people have experienced for themselves. However, when the camera zooms in, and we draw closer to the surface of the Earth, we begin to hear urban sounds. Due to the generality of this soundscape, it is unlikely that a new listener would be able to identify it as the sound of Aberdeen. However, once the video focuses on the North-East of Scotland, it becomes apparent that the field recording is taken in Aberdeen. So far the sense of place is only felt in the digital environment. However, at the end of the piece, we hear the sound of the venue, just as it was before the event. The audience members will all recognise the location as well as being able to attach a sense of temporality to this moment.

I used reverberation to exaggerate the vastness of the Universe at the start of the piece. The sounds themselves were designed to give a sense of excessive space. As the sound material changed, as we drew closer to Earth, I reduced the reverberation and gave the piece a more ‘natural’ space. The recording taken in the venue is minimally treated so as to keep it as consistent as possible with the audience’s experience of the concert environment.

This ‘A’ represents me as the performer, both active in the physical performance environment and fixed on screen at the end of the piece. It also represents the audience members who were visible and influencing the sound during the recording. I chose to denote this as one singular ‘A’ that exists on the line between performance environment and digital environment as all of the agents behave in the same way and have a similar kind of influence on the piece. Both exist in the performance and digital environment visually as well as sonically, and, while the audience are not explicitly providing information about the time, date, and location, this information is implicit as the audience will recognise this as the beginning of the concert.

57N is an audiovisual work with stereo sound. Unlike many of my previous works, it was not essential to immerse the audience in the sound, therefore fixed stereo audio without diffusion was appropriate. It was important for the physical space of the performance to change as little as possible between the event starting and 57N finishing. This continuity is vital in order for the piece to reference its performance as strictly as possible.

Using S.O.A.P. to plan out 57N led to this new and unique performance concept – one that I can confidently say I would not have devised without the aid of S.O.A.P. Using the NASA sounds merely as inspiration rather than actual samples to work with, allowed me to strike a balance between what felt musically ‘right’ and what was actually correct. This middle ground between severe restrictions and free reign helped to direct my composition whilst allowing my voice as a composer to shine through.