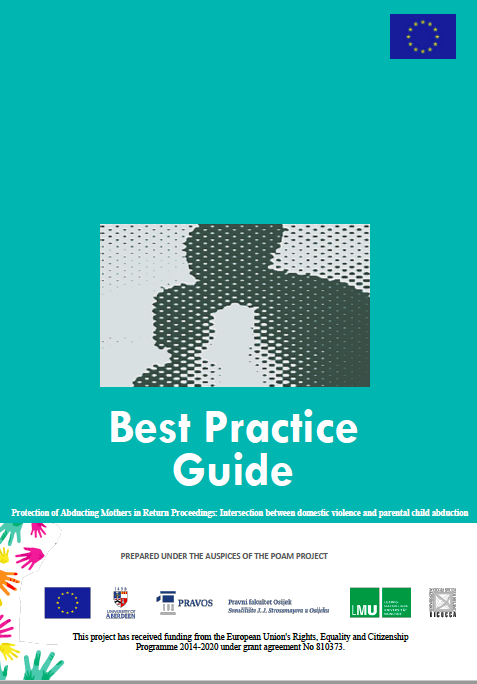 The POAM Team are very pleased to announce a major milestone in the project as the POAM Best Practice Guide is officially published today and is now available.

The Best Practice Guide on the protection of abducting mothers in return proceedings involving allegations of domestic violence was prepared under the auspices of the POAM research project funded by the European Commission from the European Union’s Rights, Equality and Citizenship Programme. It presents the findings of the POAM project, collated from the project local workshops, international experts’ workshop and national reports prepared by the University of Aberdeen (United Kingdom – Scotland), the University of Osijek (Croatia), the University of Milan-Bicocca (Italy) and the Ludwig-Maximilian University of Munich (Germany) and the National Points of Contact for Spain, Slovenia and Serbia, and refined through a process of consultations with relevant specialists, including experts from the European Commission and the Hague Conference on Private International Law.

The aim of the Guide is to assist child abduction professionals, including judges, legal practitioners, NGO representatives, Central Authorities and other public authorities involved in child abduction cases where allegations of domestic violence by the left-behind father have been made by the abducting mother in return proceedings. The Guide will also contribute towards the awareness and implementation of Regulation 606/2013 and Directive 2011/99 and compliment the HCCH Guide to Good Practice on Article 13(1) b of the 1980 Hague Convention, but with a focus on the utility and implementation of protective measures.

Alongside the Guide is an Executive Summary which has also been published to outline the key points and recommendations from the Guide.